One of the most important parts of your cello's sound and playability is actually not part of the cello at all, but a separate piece. Of course we're referring to the bow (sometimes called a "stick"), and the critical role it plays for cellists.

"You'd be absolutely amazed at the difference a bow can make!" says Carol Johnson, co-founder of Johnson String Instruments.

Considering that cello bows can cost many thousands of dollars, it's important to be informed before you decide which cello bow to buy.

"A good bow will make your instrument sound more rich and smooth and may improve its projection," agrees Tim Janof, experienced cello player and editor of the Internet Cello Society web site. "I recall my own skepticism when a fellow musician tried to explain that his new bow made a big difference. I now know he was right."

Four Characteristics of a Cello Bow

First is the weight of the bow, which can vary from about 65 grams to over 80 grams. Heavier bows require more effort and an exceedingly heavy bow can be tiring to play with. On the other hand, their very heft can help produce more sound than light bows, and paradoxically, sometimes with less effort. (Lighter bows are more maneuverable, but require additional effort to produce a sustained forte, for example.)

Another quality is balance. A cello bow with a balance point closer to the tip will feel heavy, and may even result in wrist problems. A bow balanced closer to the frog may feel lighter, but make it impossible for you to "dig in"and produce substantial tone or volume.

Strength and flexibility in a bow are especially intertwined. A stiff bow may have a very fast response, but seem to produce only surface sound — thin and narrow. Softer, more flexible bows are capable of producing richer tones, but sometimes at the expense of the response.

The longest, most substantial portion of the cello bow is called the "stick," and can be composed of three different materials: pernambuco, a very high grade wood from Brazil, carbon fiber, and Brazilwood, which is a generic term for several types of hardwoods from Brazil.

In addition, some very inexpensive bows are made from fiberglass. These are generally used only by beginning players. While they can be quite durable, the sound and playability is noticeably inferior to wood or carbon fiber bows.

Most "frogs" (the part at the of the cello bow that holds the horsehair and adjusts its tension) are made from ebony, but may also include decorative elements like ivory and tortoiseshell. The "grip" is generally wire, silk or "whalebone," while the thumb cushion is usually leather or snakeskin.

The tip of a cello bow, and any additional elements, can be made from ivory, bone, or metals like nickel, silver or gold. The mounting can be round (the most common) or octagonal shaped. Round is more traditional, but octagonal bows are stiffer, and thus prized by some cellists.

The Right Cello Bow for You

Finding the right bow is in most aspects, a personal decision. A bow should fit your playing style. If you're a beginning cello player, there is probably no need to purchase a top-of-the-line bow.

However, as your skills increase and you trade up to a higher quality cello, you should move up to a better bow as well. The important thing to remember is that a cello bow should feel like an extension of your right hand. When you're performing you should not need to think about it, and the notes should flow from it — and you — naturally.

You may need to try several bows before you find the right one. Make sure you are able to try a bow out in your natural environment (school, home, concert hall) before you buy it — especially when choosing a more expensive model. 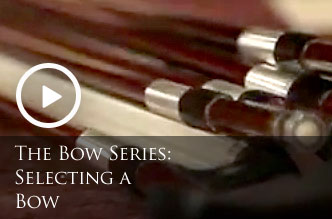