Please Note | Our store, phone lines, and offices will be closed on Tuesday, February 7 for our annual company meeting. We will reopen on February 8.

When selecting the optimum cello strings for your instrument and playing style, there are a number of options. It will take some experimentation on your part to find the right cello strings for you, but it helps to have an overview of the strings available. The three main variables are:

Gut Core Cello Strings
For many centuries the only kind of string available, the gut core cello string is made from sheep intestine (not "cat," as is commonly misbelieved). Used primarily by professional classical musicians, gut core cello strings reputedly have the warmest sound, complex and rich with overtones.

That said, they are also the most difficult strings to work with, by far. They take at least a week to "settle in" once they are put on the cello, and even then are plagued with problems. Even under normal conditions, they go out of tune frequently. Variances in temperature, humidity, and other factors make this condition even more acute. And, they don't last as long as either of the other types of strings.

Additionally, a gut core string's response is slower than other strings, and they are "softer," making sound a bit more difficult for a cellist to produce. A cello player with a Baroque instrument, or a professional looking for the traditional classical sound, will probably want gut core strings. Beginning and even intermediate players are better off with another type.

Synthetic Core Cello Strings
Invented in the early 1970s, the synthetic core cello string was created to reproduce — as closely as possible — the tone of the gut core string, while avoiding some of it's disadvantages. Thus, synthetic core strings stabilize after only one or two days on the cello, and are much less affected by temperature and humidity changes.

Synthetic core strings are manufactured either with a type of nylon called Perlon, or with a fiber called Kevlar. They are wound outside the core with various metals, including aluminum, silver, gold, tungsten or chrome steel.

The response for synthetic core cello strings is quick, and their tone, while not as rich as gut core strings, is quite rich.

Steel Core Cello Strings
Sometimes called "all metal," a steel core cello string is comprised of either a straight or twisted wire, wound with metal. Besides being the most stable and durable of the cello strings, steel core strings offer stable pitch, and the highest volume.

Often coveted by country, folk and jazz cellists for their bright, focused sound, steel core strings work especially well on electric cellos. And, because they are the least expensive type of cello string, they are preferred by students and beginners as well.

Combining String Types
Many cello players use a combination of different string types on their instrument. The most common format is probably to have synthetic strings on the bottom (G and C strings) and all metal strings on the top (A and D strings). However, every player is different, and you should experiment to see what works best for you and your cello.

Light, medium and heavy are the most commonly made cello string gauges, but some companies offer more variations, using gauge numbers. The rule of thumb is, a thicker string produces more tone, but has a slower response; a thinner string is delivers a faster response, but with the trade off of a thinner, lower volume sound.

Medium gauges cello strings are definitely the most common, but of course every instrument and player is unique, and you must discover which gauge works best for you. 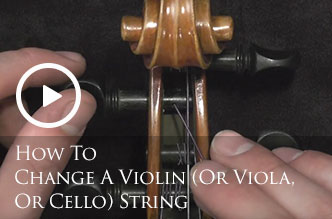