The viola was first introduced in northern Italy between 1530 and 1550. It is generally assumed that the alto, tenor and bass versions emerged soon after the soprano instrument. During this early period the word “viola” referred to any bowed Western classical stringed instrument. “Viola” was eventually used specifically for the viola da braccia which translates to the viola played in the arms (in German, the word “bratsche” is still used for the viola today). The forerunner of the instruments of the violin family, it had low ribs, a rounded back, F-shaped sound holes, a fretless fingerboard, a neck raised from the body with a scroll and four strings across a curved bridge, which meant that they could be bowed individually.

Around 1800, because music was now being performed more often in concert halls, and also because François Tourte (1747–1835) had strengthened the bow, a succession of changes to the construction of the instruments in the violin family, including the viola, were made. Strings were made heavier and their tension increased to improve projection. The neck was set at a slight backward angle to the body and was now longer, retaining the same circumference along its whole length making it easier for the left hand to slide up and down to different positions. The body and bridge were also reinforced during this period.

In the late 18th century the viola moved beyond being considered a fill-in ensemble instrument. Some composers even began to write viola concertos. This change led to experiments trying to improve the viola but it wasn't until the 20th century that the most successful steps of improvement were made. A significant contributor to the viola's development was the viola player Lionel Tertis who collaborated with the instrument maker Arthur Richardson in the quest of the ideal viola.

In this series you'll learn about violas, bows, strings, and many other related topics. The idea behind this series is to give you a good synopsis of what you need to know about the viola, from what to look for in an instrument shop or how to choose a great rental program. 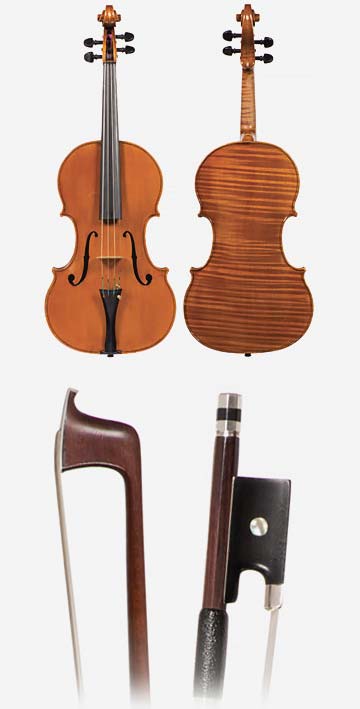