Your e-mail request has been sent!
Please Note | Our store, phone lines, and offices will be closed on Tuesday, February 7 for our annual company meeting. We will reopen on February 8. 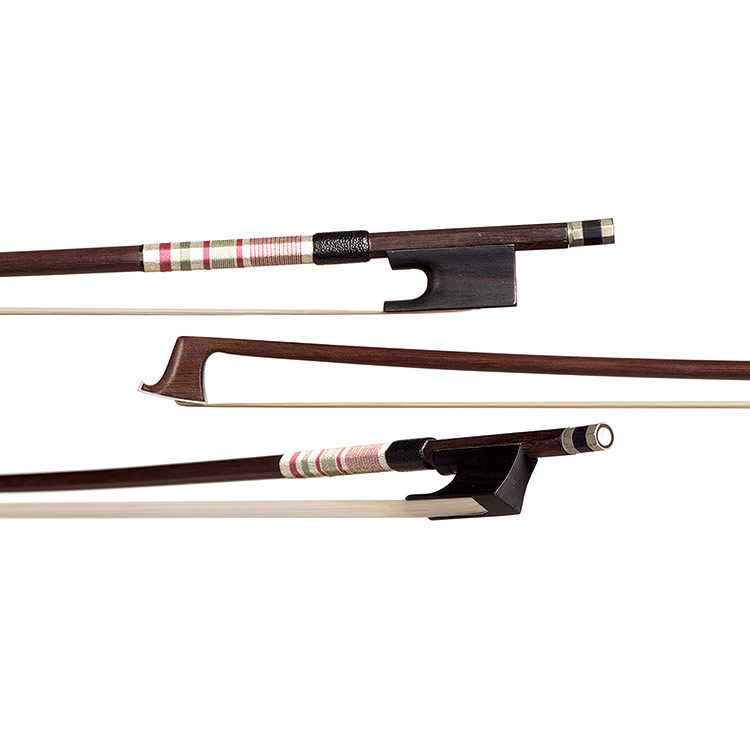 A rare French violin bow made, in our opinion, by Dominique Peccatte in Mirecourt circa 1865. The Brazilwood stick is unbranded and mounted with an open-trench ebony frog and and nickel and ebony button. All parts are original and in excellent condition.

Dominique Peccatte (1810-1874) is regarded as one of the most prominent and influential makers in the history of bowmaking. Born and raised in Mirecourt, the young Peccatte moved to Paris to apprentice in the workshop of Jean-Baptiste Vuillaume in 1826. Here, Vuillaume became both a professional mentor and close friend to Peccatte. The Vuillaume workshop offered Peccatte an opportunity to train with Jean Pierre Marie Persoit. The bows made by Peccatte during this time display the brand VUILLAUME A PARIS. Though they display details that are clearly influenced by Persoit, Peccatte's early bows also show the beginnings of certain characteristics that would later become regular motifs, such as the carefully-cut chamfers on the heads.

After leaving the Vuillaume workshop around 1836, Peccatte joined the workshop of Francois Lupot and eventually took over the workshop upon Lupot's death in 1838. During this time, Peccatte quickly became one of the foremost bowmakers in Paris. As an independent archetier, he was a prolific maker, and his style of bowmaking matured and refined. Bows from Peccatte's later period are usually unbranded, though some display the brand PECCATTE. Peccatte's bows have a distinctive "hatchet-head" shape and a direct, resolute form. Peccatte remained flexible and spontaneous with his craft, and thus no two of his bows look exactly the same.

As Peccatte rose to success as an independent bowmaker, he became a strong influence on the world of French bowmaking. Peccatte's students included notable bowmakers such as Joseph Henry and Pierre Simon. He also frequently collaborated with and strongly influenced his younger brother François, who would, in turn, go on to teach his son, Charles. Dominique Peccatte's reputation was bolstered further by an honorable mention at the 1839 Exposition des produits de l'industrie française and a bronze medal at the 1844 Paris Exposition. In 1847, Peccatte returned home to Mirecourt, where he continued producing bows until his retirement around 1870.

Peccatte's bows are highly regarded and are sought after today among professional musicians and collectors.

Sold with a certificate of authenticity from Paul Childs